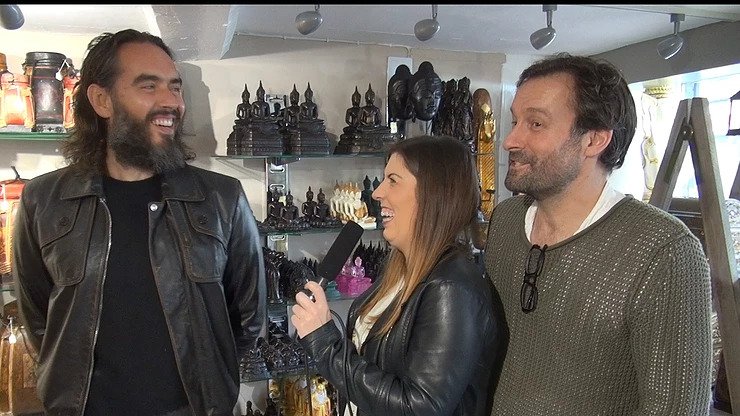 Interviewing celebrities and A-listers is just one of the highlights of being a TV Presenter but it can be nerve-wracking at the same time and preparation is always key and you can’t get starstruck either. Recently we interviewed Russell Brand who was a great guy, really interesting and fun.

Gemma: “I’ve been lucky to interview lots of celebrities over the years, I remember my first celeb interview with a known actor (they will remain nameless for reasons that will become apparent soon). I was really excited but also nervous, wondering what they would think of me, would I do it right, remembering all the questions that I prepared to ask, but the actor turned up a bit boozy and swore several times during the interview. It made it hard to control at times. What made it worse was that the whole interview was not only in front of people but was being filmed for a newspaper. I look back now and laugh, not all interviews are like that most are really fun but you have to see it like any other job.

Although they are celebrities some of them don’t like being interviewed, some of them can be more nervous than the presenter, so I try and have a laugh with them and make it different from all the other interviews they might have had. Can you imagine how boring it gets for Tom Cruise after 30 presenters interview him at a press junket on what it’s like to be in the new Mission Impossible film, think different! That’s why I love Alison Hammond, she does it her way and you can really see she comes across as being herself.

Russell was really easy to interview as I watch his videos so I knew a bit of his background but some others I’ve had to interview…I’m like who…..? And I have to do lots of research. I would say 99% of the celebrities I’ve interviewed have been really nice there have only been a couple who I’ve not liked interviewing but if I’m honest they’re known for being a Diva”

Russell has recently re-launched his podcast ‘Under The Skin’, which you can catch up on Spotify and if you’re looking for some inspiration check out his Facebook page and watch his videos.